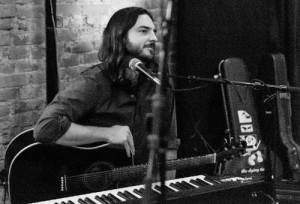 Join Dragonfly Yoga Studio owner and Destroy It Up frontman Joe Simek for a special night of yoga philosophy and original music. Simek will be performing an albums’s worth of new material, all inspired by Patanjali’s Yoga Sutra.

This is not an album of sanskrit mantra and Indian instrumentation. While the lyrical concepts come from the yogic and buddhist lineage that culminates in the Yoga Sutra, the music and melody follow a different lineage: that of Bob Dylan, Jeff Tweedy, Conor Oberst and the like.

Simek will be playing solo versions (piano and guitar) of his new songs, which are inspired by ideas from the Yoga Sutra, like dvesha (aversion to pain), and vairagya (non-reaction), and ishvarapranidhana (surrender). The evening will take a workshop-type format as well, as Simek will be discussing the Yoga Sutra, how it informed the lyrics, and his personal inspiration for each song. (We will not be doing yoga poses.)

About Joe Simek:
Joe most recently studied the Yoga Sutra as part of his Advanced Vinyasa training with Rolf Gates and his Yoga Therapy training with Brandt Passalaqua, which both served as inspiration for this project. He has owned Dragonfly Yoga Studio with his wife Alexis Ridge-Simek for more than a decade. Destroy It Up has been making music since 2014 and has self-released two EPs. Listen to a few (of the more yogic-leaning) tracks from previous Destroy It Up releases below and learn more at www.destroyitup.com.

Rock ‘N’ Roll Sutra: An Evening Of Music Influenced By The Yoga Sutra