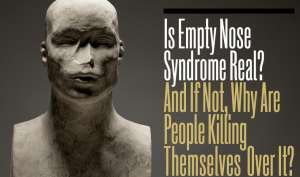 After reading Buzzfeed’s recent article, Is Empty Nose Syndrome real? And If Not, Why Are People Killing Themselves Over It?, my heart went out to the people suffering with this condition. My mind also quickly turned to yoga therapy, as I thought about how yoga techniques might help those who suffer from this rare, but often debilitating condition.

The common denominator with all ENS patients is a turbinectomy, or a surgery to remove or reduce turbinate bones in the nasal passage. The goal of the surgery is to relieve nasal obstruction that occurs as a result of allergies or anatomical factors. In some cases, patients who have turbinectomies later suffer from a wide range of ENS symptoms, from nasal dryness to feelings of suffocation, which more than likely leads to the other symptoms of depression and anxiety.

Yogis believe our breath (the respiratory system) moves prana, or energy, along subtle/invisible channels (nadis) in the body. Two of the most important energy channels are called ida and pingala nadis and they start — you guessed it — at the nostrils and criss-cross all the way to the pelvic floor. We use pranayama, or breathing techniques, to balance the energy between these two channels, as ida caries cool, feminine energy via the left nostril, and pingala carries warm masculine energy via the right nostril. We also think of ida nadi as being tied to the parasympathetic nervous system (“rest and digest”), and pingala being tied to the sympathetic nervous system (“fight or flight”).

From a yoga perspective, the key to helping ENS suffers most likely lies in exploring how turbinectomies disrupt a few main functions:

Science doesn’t know exactly why the body has a nasal cycle, but if you ask a yogi, they would say it might be to balance the prana/energy between pingala and ida nadis. People who suffer from ENS may not be able to regulate this vital energy in their systems because the the natural nasal cycle has been thrown off.

Turbinectomies that interfere with the mucosal layer of the turbinates may also make people with ENS lose the ability to feel their nasal breathing at all, because the pressure receptors in the nose have essentially been removed [ARS]. Those feelings of suffocation mentioned before — or intense congestion — probably come from the body sensing the wrong pressure in each nasal cavity. In other words, both nostrils are congesting when they should be opening. Furthermore, turbinates are responsible for temperature regulation of air (warming it), which could be why ENS suffers often complain of feeling like they are only breathing in very cold air.

So how could yoga balance this energy manually? How can we teach the nose and body to be more sensitive to pressure and temperature again?

One answer might be Alternative Nostril Breathing (ANB), or Nadi Shodhana, a breathing technique where the practitioner uses his or her fingers to open and close the nostrils in order to breath in one nostril and out the other nostril. One side is “congested”, or closed by a finger, while the other is open. And then, vice versa.

In theory, ANB might help the body to again regulate its nasal cycle and balance the important energy channels in the body.

Alternative Nostril Breathing a very common practice in most yoga lineages and can be found many places on the internet. I highly suggest you find a yoga instructor to teach you ANB, but if you try it on your own, start slowly, perhaps a round of 5 to 7 breaths twice a day, and build from there.

It might also be important for ENS suffers to do yoga practices that sensitize the body to heat overall. This could be done by doing yoga sequences that build just enough heat in the shoulders and head, and then resting in restorative poses to bring that heat back down to the core. This might look like a very mindful vinyasa (flow) yoga practice with purposeful child pose rests when the heat gets high. This will sensitize the body to temperature changes.

A combination of these practices would be a good starting point for a yoga practice designed at eliminating the severity of ENS symptoms. And, of course, yoga in general often helps people with anxiety and depression.